Zoroj made some new addition to the game:

There is a new background from Gavel:

Penguin of the east1 year ago

Did you try in the Forgotten Temple in the Swamp?

And be ready to use more than one lizard lure. One alone use to never work. I used 3 or 4 to get the raptor.

Thanks yes they were found at the forgotten temple

Reply
Penguin of the east1 year ago (1 edit)

When I attack victoria to get ste his farm doesnt appear when I explore underground like it did when I had arion free him is this a bug?

It appear in the underground map while walking between her place and the village, swamp or lizard places. Just I remember a new route but maybe it take few days to appear.

But... I am using the android version and I just asked the half horse guy to care of her needs with his love sword..

I waited 2 days but it didnt appear yet

Maybe you should try back there or do it again from the start. I don't  know.

Can't sell smoke bombs to Torben as we can to Xer in the fair. Is that right?

and... I love that bomb making me more handsome than who I am. 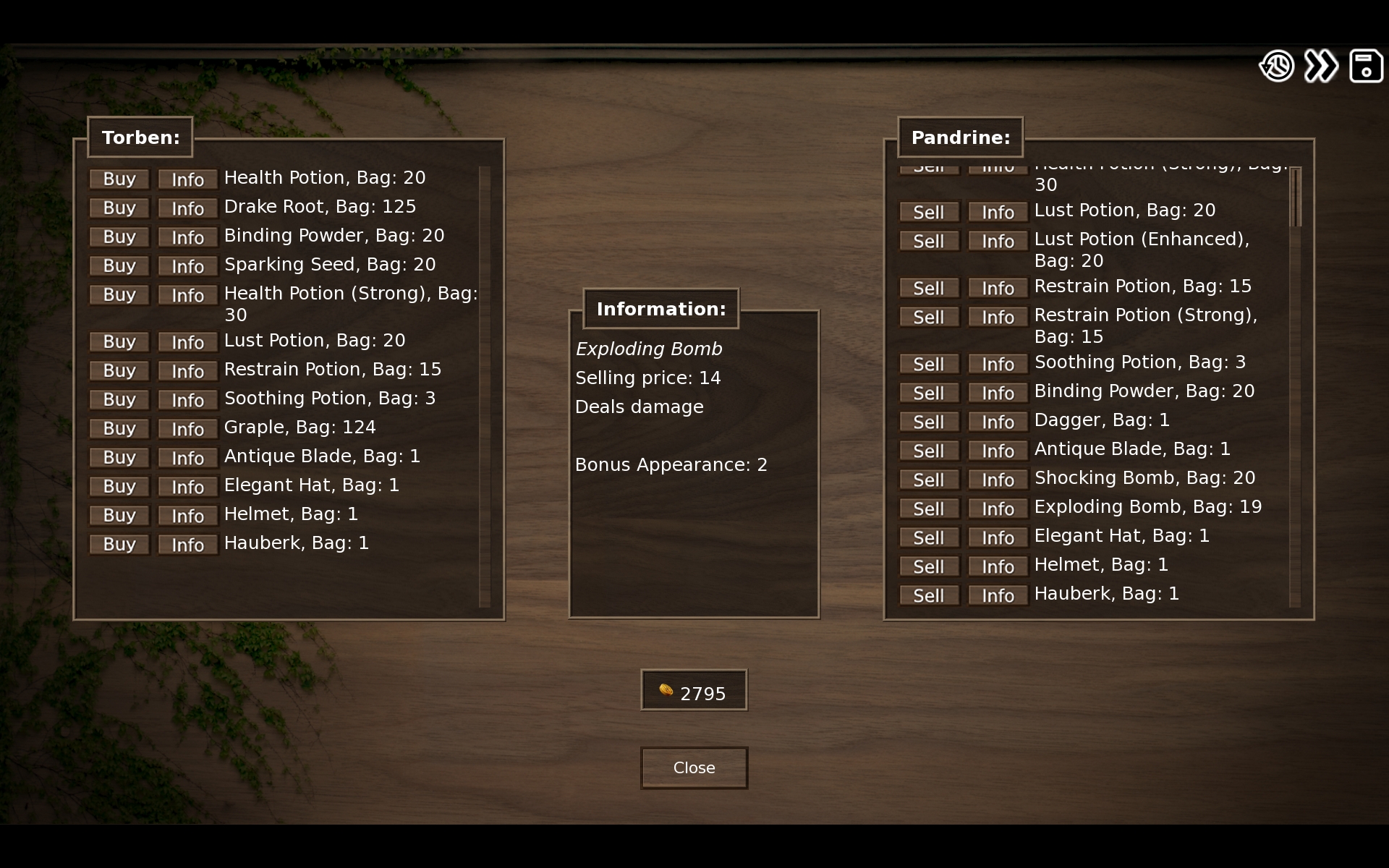 Oh yes!!! I am using a Sansung tab A tablet with android 9. 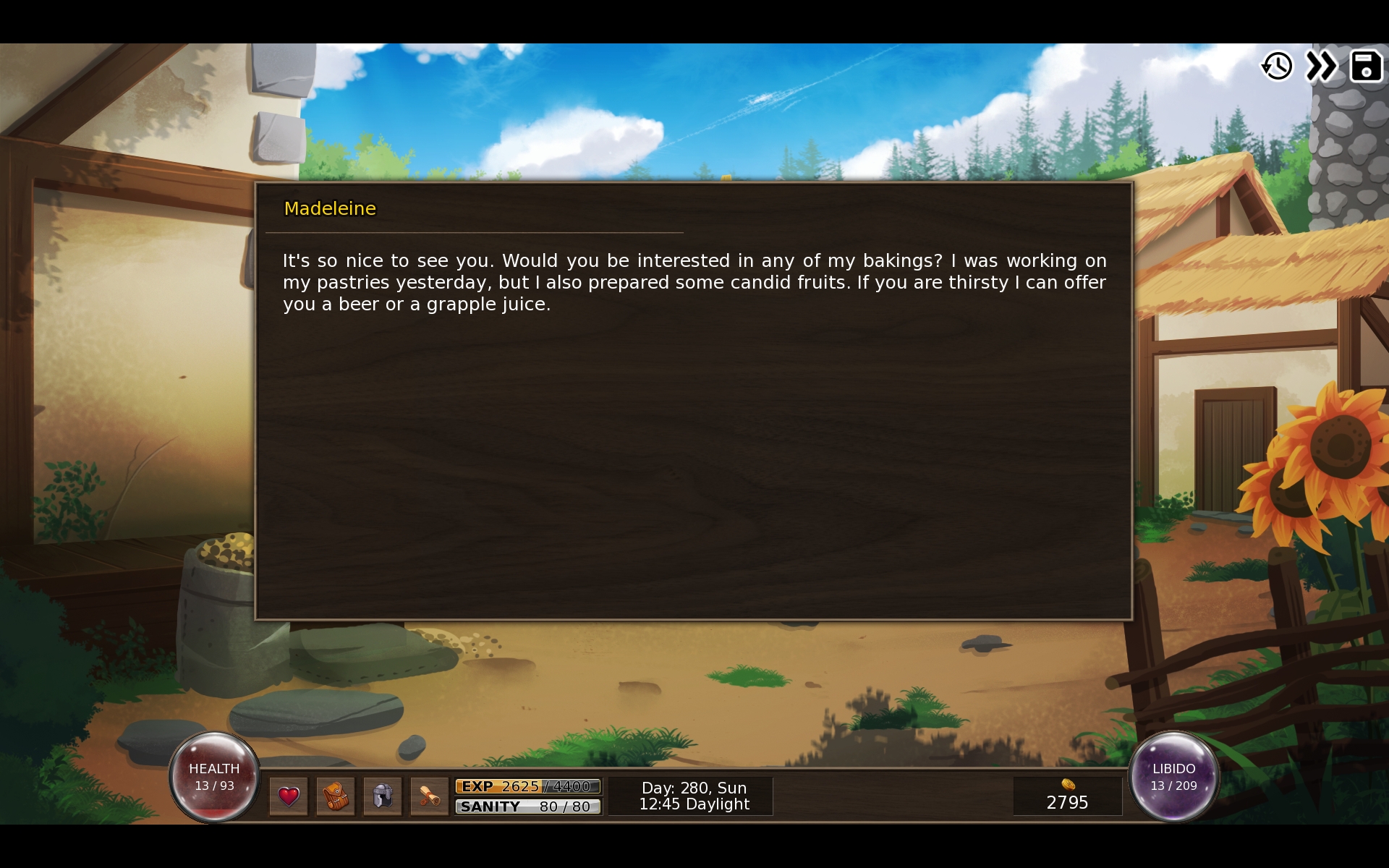 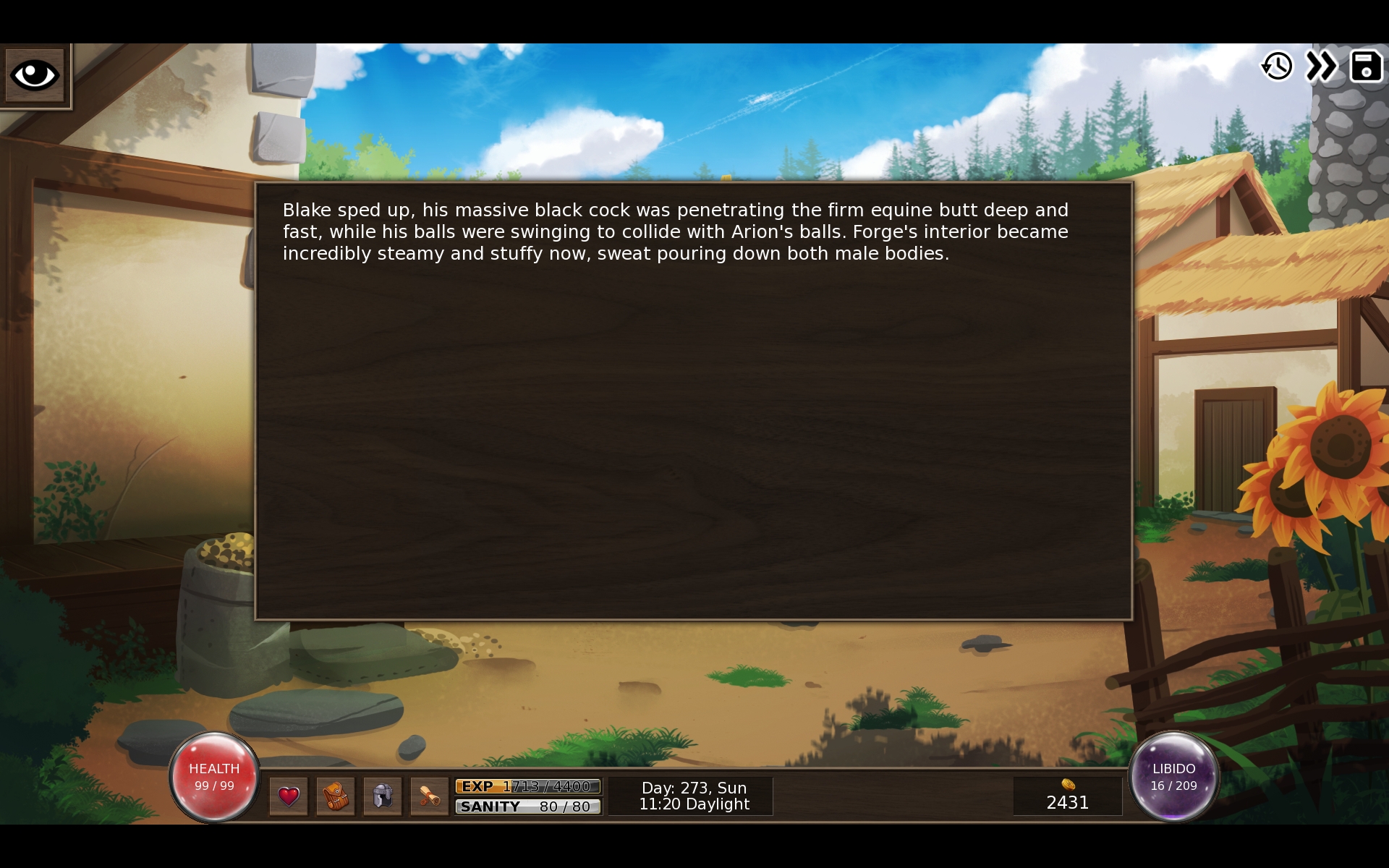 I must say, I love this game, hope it gets finished someday, I do hope so. Also, since Christmas is coming, pls take a break until January something, do not overwork yourself. I hope this game can be successful, because it is a gem. And do take care of yourself.

Hey Hyao, I might stumbled upon a bug or not playing the games right. I just played your game for a few days non-stop now and I want to say, this is the best BL game I've had in my life. I'm on day 107 in game now, finished all available quest except for the "curse of the lust". I'm stuck in finding the statue and have read the guide. I've unlocked the ruin and the corrupted lake earlier in the game, however I only have the statue from the Bandit's camp and from the Witch's quest. The guide said the first one is in the Swamp, but I've spent days looking for it and can't find it, even though I've met Rhot already. What should I do?

I am not sure but, did you walked in the corrupt lake.? I think you find it there.

If you didn't find this way is probably a bug

I have tried the corrupt lake and I cannot find it there. Rhot is the one who showed me the ruin and he just left me there, I didn't get through any puzzle or anything, unfortunately. So this is probably a bug, and I don't really want to start from the start again, ahhhh

If you check your questlog it tells you how many days need to pass before you can start building the next improvement.

Hey theres a glitch for the Testing Your Skills quest from the Apothecary. You get no gold from it and its been there since the previous update

I forgot where I read it but will there he an update which will need us to re download the game and lose our saves? I dont want to restart all my progress.

Not unless hyao has another overhaul on the gui of the game.

What's the link to the guide?

Hey I just want to know anyone know where is the dungeon?

dungeon? with korg? - err. i think it is mountains near feliar the satyr, and there is ablity to look deeper - it is maze like adventure

Yeah northcrest cave you find by looking for another way around the troll.

If you're talking about the one mentioned in this changelog, It's the one under your house. You need to build it.

What is the requirements for the Werewolf hunt, aside from night and rep, do we go to the den or the cottage or just check the nearby area?  I've been looking around forever and I can't trigger it.  I also can't get the new dialogue options with Caleb, do they have a requirement?

Logan romance is like the most aggravating slow burn ever..... especially when hot cg from corrupted logan path keep getting released

This. I just wanna be his waifu, when is he gonna dick us the frick down. D:

hey, i fancy Blake bcs he is silent, cool type, but then i can f... him, still would love more:D

If Logan's slow burn, Blake is not even burning

Some events only open after you get some high abilities, like strength with Logan, Rhot(maybe + agility) and the red lizard or some early event.

But I have no idea about what there. Maybe you need had sex with them both or have one heart at least.

I just imagining Blake kicking our ass out if he didn't love you.

Are you entirely sure that the event that involves spotting Rose near the Old Barn was programmed in? Because I've spent approx. 15 minutes Skipping through Read text, just leaving the barn and going back to it, and have yet to encounter it.

After going through the Halloween event, I tried again, for another 10 minutes. Still nothing.

I think if it didn't happen when you went there in the 1st time. It only may happen in another day.

Going and leaving the same place may not help.

I downloaded the update and as soon as I loaded my saved game from the prior version I was given 2 green gems.
Are those from the Lizard event, or are they something else?

Will there eventually be visuals for the NSFW scenes ?

I mean, there is one for the corrupted Logan with Barrell  at night in the lighthouse.

I'm pretty sure it will get a cg if the mc isn't involved.

Have some scenes you just need click in the eyes button. Like one under the tavern with where rats, other with the ratking, with the orc. I think have others I just do not remember now.